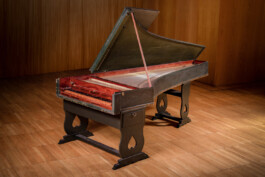 A harpsichord from the workshop of João Baptista Antunes, 1789, Lisbon, with two 8' registers and with an exceptional range of five octaves and a third (FF-a3). Buff stop on the shorter strings.

When this instrument came to my workshop, it was in a reasonable state of conservation, though not in a playable condition. It underwent a full restoration to a playable state. As some of the original jacks were missing and many of the remaining ones could not be repaired, a full set of new jacks was made, copying the originals as closely as possible. The voicing was done with seagull feathers. The original stand was missing, the present one is a copy of the stand of the 1785 Joaquim Jozé Antunes (a brother of João Baptista), formerly in the Finchcocks collection.

The level of craftsmanship apparent in this instrument is somewhat unsophisticated. However, the action is very effective and the soundboard (composed of slab-sawn planks in a typically-Portuguese manner) produces a sound of exceptional quality, all of which makes this a harpsichord that is inspiring to play and a delight to listen to.

The instrument is part of the collection of the Museu Nacional da Música in Lisbon (inventory number MNM 0373).

There is a book available about this instrument and its restoration. 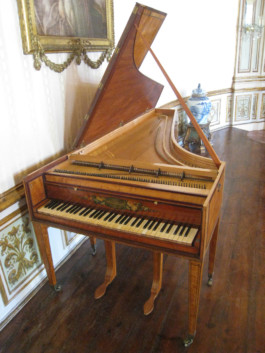 Pianoforte by Muzio Clementi, London, around 1810.

After being restored in the 1990s by Klinkhamer of Amsterdam, this pianoforte had been left unused and without maintenance for almost two decades. In 2014, when it was decided to begin using it again for concerts and recordings, work was begun to refurbish the instrument. This consisted of raising the pitch to 430 (while paying special attention to the stability of the case), a full revision of the keyboard, keyboard action and pedal action, as well as voicing (which was done in collaboration with my colleague Paulo Pimentel).

The instrument sits in the music room of the Palácio de Queluz, an 18th century palace near Lisbon Clavichord by Johann Paul Kraemer and Sons, Göttingen, 1803 (nº 571). This instrument has two 8' strings (no 4') and the typical range of FF-a3 for the later clavichords of this workshop.

The instrument had always been kept in a playable state, but the stringing and set-up did not reveal its musical possibilities to best effect. The restoration consisted of:
- General cleaning
- Removal of the non-original green paintwork on the outside of the case
- Stabilisation of the cracks in the belly rail
- Re-gluing of the bass hitch pin block to the left case wall
- Installation of a new keyboard flap
- Replacement of the non-original lid (presumably made in the 1950s) by a new lid, made after two original Kraemer lids
- Restringing
- New set-up
- Addition of a music stand
The result is a clavichord with a beautiful free-sounding treble and an impressively powerful bass.

Click here to see a video of an interpretation of J.S. Bach's Chromatische Fantasie und Fuge, BWV 903 played on this wonderful instrument. This instrument once belonged to Marie Clothilde de France, sister of King Louis XVI. For the treble part of the soundboard, Taskin used the soundboard from an Andreas Ruckers virginal of 1636. (The rose probably comes from the same 1636 virginal.)

The instrument had been kept in a playable condition, but sometimes in ways that were inspired by a more piano-like sensibility, such as the use of thick stringing and the insertion of many lead weights into both the jacks and the keys. Luckily, the soundboard and bridges appear to be completely in their original state. The initial phase of the restoration was undertaken by Ulrich Weymar of Hamburg, who (among other things) resolved some structural issues, repaired cracks in the soundboard and got the knee lever action working again. The case decoration was completely restored by the José de Figueiredo National Laboratory in Lisbon. I was largely responsible for the restoration of the keyboards. I also manufactured a new set of jacks for the three quilled registers and took care of the voicing (seagull) and regulation.

In the future, work will be undertaken to restore the "peau de buffle" register.

The instrument is in the collection of the Museu Nacional da Música in Lisbon.

For a video featuring this instrument, click on one of the following links: La d'Héricourt by Claude Balbastre and La Couperin by Antoine Forqueray.